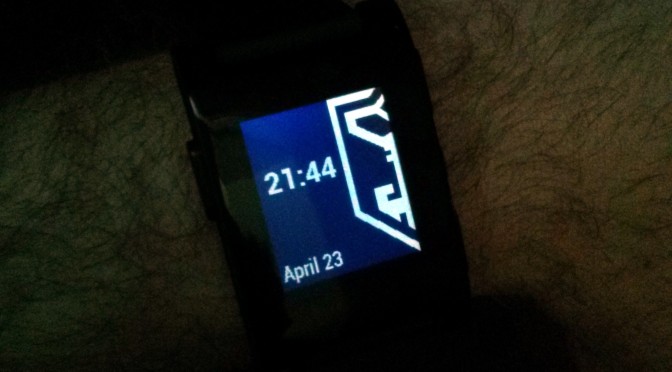 Actually, I’ve been using my Pebble as a rather trusty companion for Ingress, and it’s a pretty awesome add-on for a few reasons: 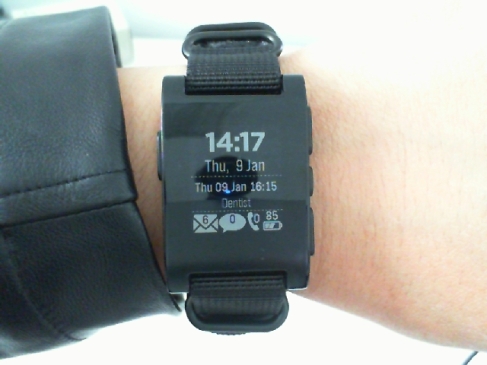 It’s certainly helpful that the Pebble is water-resistant for field operations in all climatic conditions; and by changing the standard rubber watch strap that came with the Pebble to a NATO military strap, it is better secured to my wrist (the way a NATO strap is attached means that if one of the pins securing it to the watch breaks, the watch will stay attached to one’s wrist).  If other agents would like to attach a custom strap to their Pebble, the appropriate strap size is 22mm.  There are numerous NATO straps in various shades of Resistance blue or Enlightened green for those who would like to show their team colours. I got mine on eBay for about $9, and I preferred a subtle all-black band rather than sporting an overtly military or brightly coloured watch band: http://www.ebay.com.au/itm/200877477841?var=500137539672&ssPageName=STRK:MEWNX:IT&_trksid=p3984.m1439.l2649.

The one I have is cheaper than some of the others on eBay, but isn’t very long, sized for wearing on the wrist.  “Real” NATO straps are longer, allowing them to be put on over clothing (e.g. fatigues, wetsuits).  The extra length is tucked back through the extra loops on the outside of the strap when worn on the wrist – just something to be aware of.

I’ve also been trying out a wrist-mounted bearing compass for navigating to new portals while driving – previously, a compass was also useful for resonator deploys, to quickly determine the direction of the most defensible resonator position when the deploy screen only had cardinal positions rather than a map overlay.

Those days are long gone, but now, in “Navigate to Portal” mode, ADA calls out the direction and distance to the portal targeted, and I can drive in that direction without needing to look at my scanner – just keeping an eye on my compass from time to time.  For navigation on foot, I can even set a bearing on the compass (this one has degrees marked on a rotating bezel, and a bearing arrow on the base) and put away my scanner to save battery or improve my stealth in the presence of other agents.

Still – I’m not sure how terribly useful it is to have a compass on my watchband, to tell you the truth: it hasn’t vastly improved my game as it did with the old cardinal point deployment system.  The only reason it is still on now is because I don’t even notice it on the band, so I haven’t been too fussed about taking it off.  Anyway, if you want one to try for yourself, you can get it on eBay, here: http://www.ebay.com.au/itm/COMPASS-Watch-Band-Clip-on-Navigation-Wrist-Compass-New-Precision-LiquidFill-/360463504817?pt=LH_DefaultDomain_0&hash=item53ed4c95b1&_uhb=1 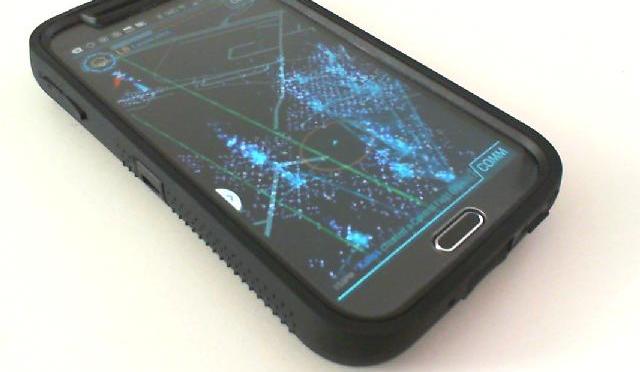 The need for power…

One of the most important tactical considerations when playing Ingress is keeping your mobile device (aka “scanner”) powered.  Most mobile phones have enough battery capacity for a couple of hours of continuous play at the most.  But at the end of the day, after your phone has been in your pocket for several hours, your battery may not be capable of letting you play – especially if it is an older battery with reduced capacity.

There are three ways to prolong your power in the field:

Each of these options has its own advantages and disadvantages.  External power allows for non-stop play without having to restart your scanner at some critical moment; but they mean using bulky battery packs and clumsy cables.  Replacement batteries allow your scanner to remain slim and light at all times, but require you to completely shut down your scanner to put in a new battery, which often occurs at a most inopportune moment.  Extended batteries can enable extended, heavy use; but mean carrying a bulkier device.

If you decide that the extended battery option is for you, then you should check outZeroLemon’s batteries for various Android mobile phones.  They claim to have the longest-running, highest capacity batteries available, as well as assuring the quality of their products with a 180-day warranty.  Having heard some very positive reviews of ZeroLemon’s products, I purchased one of their extended battery kits for my Samsung Galaxy Note 3.

The kit comes with the largest capacity mobile phone battery in the world, with a whopping 10,000mA of power (10A).  This translates to around three times the life of a standard Note 3 battery, and means some serious stamina in the field.  This afternoon, I played for around three hours after using the phone intermittently during work.  Even after all this activity, my battery capacity had fallen by less than 20%.

Not just a battery…

The ZeroLemon batteries do not fit into the standard battery cavity in the Note 3.  Rather, they stick out behind and to all sides of the orginal battery dimensions, making the standard rear case cover unsuitable for use.  For this reason, ZeroLemon batteries come with a shock and water-resistant hard case with a built-in screen protector, as well as a wrap-around soft bumper case.  The Note 3 battery also comes with a snap-in holder for the whole shebang, with a belt clip in the back that doubles as a kickstand.  It’s all very well put together; once assembled, the phone feels hefty but rock solid.

So far, this product is performing very well indeed.  I’m pretty happy to add my endorsement to the many that are already out there for the ZeroLemon extended battery kits!  Check out this video by another ZeroLemon customer if you want to know more. 🙂

Playing Ingress with large tablets can be a troublesome business. Because they don’t fit in the hand, they are prone to being dropped while an agent is active in the field; they are too large to be attached by a lanyard; a protective case makes a large tablet even larger and more bulky; and it is inconvenient to constantly pull a tablet out of a bag and put it away again.

The somewhat verbosely-named iBackFlip TabKeeper 360 is a tablet bag with features that overcomes all of these issues, making it an ideal addition for Ingress agents using tablets. Like other tablet cases, it provides padding and protection; but it is also designed to fit most tablets, varying in size from 7″-10.1″ in such a way as to make them accessible simply by flipping down the front of the case.

The strap can also be configured so that the case looks like a messenger bag or a briefcase; but for Ingress agents, its “sling” configuration will be most useful for pulling the bag to the front and flipping out the tablet for use; then closing it up and slipping the bag to the back for maneuvering while the tablet stays secure and safely packed.

The large back pocket looks large enough for carrying a spare battery or other accessories; and the flat pockets could be used to store, organise, or tidy cables so that the tablet can run off a battery pack within the case.

I’ve ordered one of these and I’ll do a full review when it arrives!  But if you can’t wait for the review and want your own, you can grab one from iBackFlip, who offer international shipping as well as payment via Credit Card or PayPal: http://ibackflip.com/shop/ibackflip-tabkeeper-360/.  You might also like to check out this promo video from iBackflip:

Improving the efficiency, effectiveness, and enjoyment of agents since 2013.